Glen Campbell: I’ll Be Me – amazing movie about the realities of Alzheimer’s 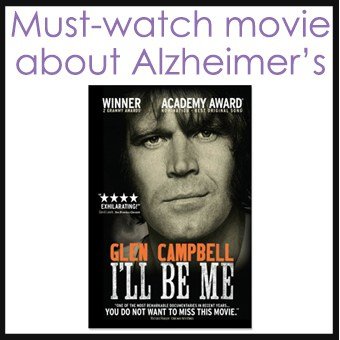 I posted a list of 9 Movies About Alzheimer’s and have been working my way through watching them.

I had put off watching Still Alice for quite a while – I read the book when my dad was first officially diagnosed with Alzheimer’s and was too scared I’d start crying and not be able to stop. While it was good – it didn’t turn me into the puddle of tears I so dreaded… maybe because I had worked myself up so much about it! Kind of like when you are so excited to see a movie and it disappoints but the person you go with who didn’t have any expectations thinks it was amazing.

Anyway, I just watched Glen Campbell: I’ll Be Me… I became the blubbering daughter who is grieving her dad and understanding just how much more this family went through than was even shown in the documentary. I went in with no real expectations which probably made it hit home even more. 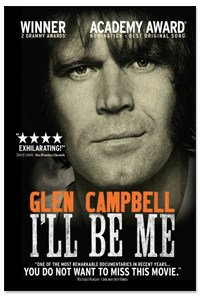 Glen Campbell: I’ll Be Me is an excellent documentary about how Alzheimer’s impacts every aspect of life – not only for the person with the disease but their family and friends as well.

It was familiar to me in so many ways – I too have experienced the changes in personality, the anger outbursts, the forgetfulness.  I used to worry and wonder about the day my dad didn’t know my name or recognize me – that day has come and gone and is simply “what is”.  As his daughter Ashley Campbell said in one of the interview excerpts, “You just have to let it go and realize it’s out of your control.” It is so true and some days, so incredibly hard to do.

As I watched I texted my mom and said that while it wasn’t easy, at least we weren’t dealing with all the behaviors and challenges on tour buses and in hotels! But at the same time it seems touring and performing helped Glen Campbell stay connected and present longer than he may have otherwise.

I want to thank Glen Campbell and his entire family for being open, vulnerable and brave enough to share this journey with the world. To shine a light on a disease many don’t want to talk about.

Alzheimer’s affects over 5.1 million Americans today and an estimated 44 million worldwide according to the Alzheimer’s Association. These numbers will increase exponentially in the coming years as more and more baby boomers become older and more at risk. Many people have no concept of what the disease is like when it affects your family – movies and information and general awareness like this are helpful so they can be more prepared.

While each person’s journey and combination of symptoms and experiences will differ – one thing is the same: there is no cure so it will be a journey through mental and physical decline to the end of their life.

I highly recommend watching this movie to gain another look into how Alzheimer’s affects a family and how this particular family has rallied to support their loved one: Glen Campbell.

Here is his last song – I’m Not Going to Miss You – which rings very, very true to me and what I have experienced with my dad’s decline into Alzheimer’s.

This is a song his daughter Ashley Campbell wrote and performed for her dad – love this too!

Sending love and strength to the Campbell family – and every family dealing with Alzheimer’s.

P.S. If you liked this, you might like the poem I wrote from my dad’s perspective (I can’t sing!) If Alzheimer’s Could Speak…