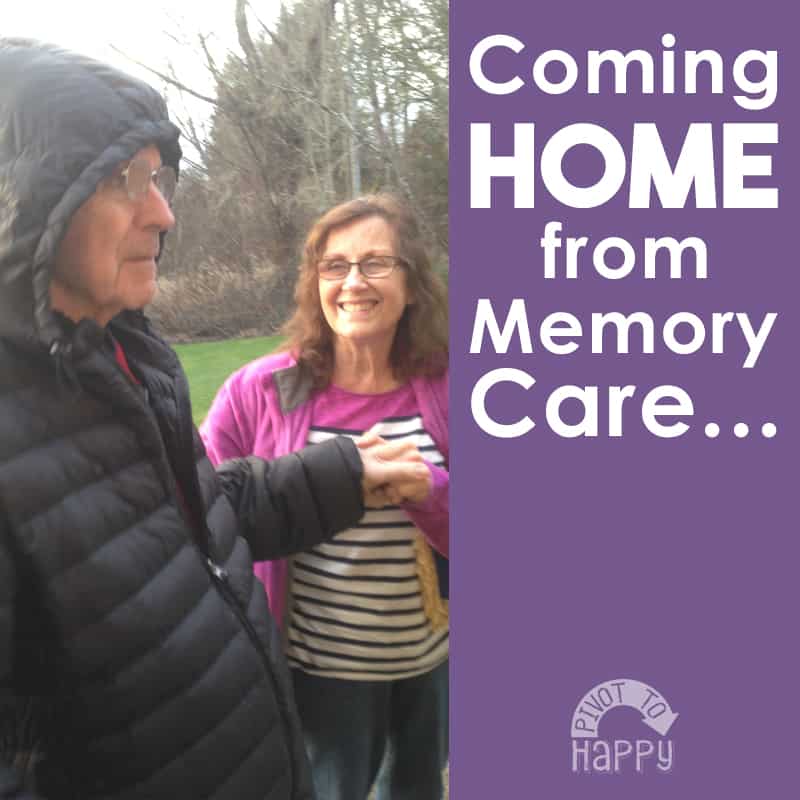 It certainly isn’t something you hear about every day but that can be said for many of the things my parents have done in their nearly 53 years of marriage.

The decision to put someone in a Care Home or to care for them in your home as things progress with dementia and Alzheimer’s is one of the hardest things a family has to do. Neither choice is easy – there are challenges and rewards to each choice. 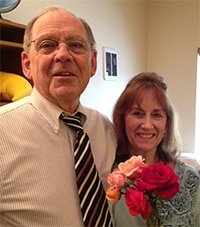 Almost three years ago, my family made the hard choice to put my dad into a Memory Care home. It happened much sooner than we expected but it was what was needed for the safety and well being of everyone. My dad never understood his diagnosis and was very angry – believing my mom was trying to control him and that we were all in cahoots. He wanted to get a job teaching Astronomy at the college level again, or volunteer in local schools. His reasoning abilities were definitely impaired and there was a lot of conflict in their home. He was beginning to get day and night confused – wandering around the house all night so my mom could rarely sleep, worrying about what he was doing and where he was.

He needed a lot more social interaction than she could provide or we could add by visiting. The adult day care wasn’t enough any longer. My mom’s stress levels were through the roof and the writing was on the wall – things couldn’t go on like they were. So in May of 2012, he went into a Memory Care Home – I have to say, I didn’t expect him to come out.

Nearly 3 years later, he is now back at home with my mom who is caring for him in the late stages of the disease.

The choice to bring someone home to care for them after they have been in a Memory Care home is VERY, VERY UNUSUAL – almost unheard of.

Most families keep their loved one at home through the whole journey, or if they put their loved one in a home, it’s for the rest of the journey. Very few people decide to bring them home towards the end. The activities director said that she had never heard of anyone doing it in the 12 years she has worked in the industry.

So what prompted my mom to make this choice? That was the big question on everyone’s mind. (Well, some people questioned her sanity as well but I promise, she is ok.)

When she threw the curveball, the day before my birthday, I was full of fear and panic. It felt like this choice was coming out of left field and I had a lot of concerns. WHY did she want to do this? HOW was she going to do this? Had she lost her mind? (And WHY did she announce this the day before my birthday!?! I assure you, there were many tears that weekend and none of joy.)

My sister, brother and I went into question mode. We realized that in the end, it was her decision, and to push too hard against it would only make her more resolute. The best course of action was to try to understand the WHY and then work on the HOW.

My mom explained that one of the main reasons we put him in the home was because he was so angry, and angry with her, and that she couldn’t take care of him. He also needed the socialization and the locked environment where he was safe to wander at all hours of the day or night.

But things have changed drastically. He now sleeps 12-15 hours every night and naps during the day. He isn’t angry – he is very content to look at books or magazines for hours on end. He is rarely verbal and moves very slowly – no longer a flight risk. She felt in her heart that she wanted him back at home so he would have more one-on-one attention and so they could be together.

My parents have always had an amazing and loving relationship. For her to want to be with him and take care of him now that the battle is no longer there makes sense. But had she really thought the whole thing through?

Nearly 60 percent of Alzheimer’s and dementia caregivers rate the emotional stress of caregiving as high or very high; about 40 percent suffer from depression.

We had seen my mom in the grips of depression and a near nervous breakdown when we decided it was time to put my dad in a home – we didn’t want to go there ever again.

We discussed the types of support she would need – hiring caregivers to give her a break and to help with bathing. Safety measures that would need to be implemented into the home.

Then, we asked her to do a test – to bring him home for a few days and nights BEFORE moving him out completely. She had to give 30 days notice so she had some time to test to see how he would react and to get things organized for his return.

The first challenge came when we tried to get him into the car… nothing doing. He was TERRIFIED and held his body stiff as a board. He clung to the top of the car and the door as if his life depended on it. We didn’t expect it but it made sense – it has been a while since he’s been in a car and who knows what he perceived it to be… perception changes in the brain as dementia progresses – for all we knew, it could have looked to him like we were trying to put him in a suitcase!

That was an epic fail but we weren’t deterred.  We talked with the care home and arranged for them to bring him home on their bus – that was interesting as well. He had no interest in getting on or off and I ended up lifting his feet as my mom and the driver guided him and made sure he held the rails. Getting him off the bus was equally interesting. 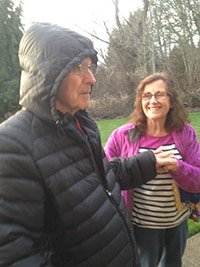 What happened next was nothing short of amazing…

My dad was home for 3 days and 3 nights for the test – to see how he did and how my mom felt about it, before the actual move would take place. While my dad had only lived in the house for 7 months before going to the home (they had moved to Oregon from Nevada because of my dad’s illness) he recognized things. His eyes perked up and he said things that made sense!

The three days went incredibly well. My dad was more alert and engaged than he had been in months – more than I thought possible. He made more facial expressions and gestures to let us know how he was feeling and if he understood or was confused. He would point to things he wanted and shake his head to things he didn’t. He and my mom fell into a comfortable routine. We all felt better about the choice – but still knew that it wouldn’t be without its challenges. 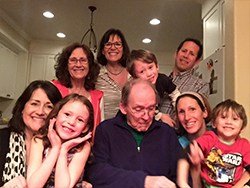 On February 26, 2016, my dad moved back home. My sister Christine came from Pennsylvania to help with the transition. My brother and his family came as well. We are learning each day how to do things easier, settling into routines and schedules and hopeful that this will be a pleasant and healing time for all of us.

My mom has a caregiver coming for a few hours, four days a week. We have “George-proofed” the doors, stove knobs and other things that could pose a safety hazard. I’ve been “shushed!” by my dad a few times and my dad has let me know that my mom talks a lot with an amusing facial expression and hand gestures. We have danced, celebrated birthdays and hung out.

My brother’s kids (the young ones in the photo) are asking questions – “If he’s home does that mean he’s getting better?” “How come he can’t talk anymore?” “What can we do to help teach him?”

We are thrilled by the support we are receiving from friends and family. YES – this was a bold move on my mom’s part but we are here to support her and help make sure things go as well as possible. We also know that if things need to change again in the future, we can make new choices. For now, this is what feels right for my parents and our family.

In the end – everyone has to decide for themselves what will work and what will give everyone involved the best quality of life possible.

We choose, we see how things work, and we pivot. We do our best and enjoy each wonderful memory as they come. We learn from the challenges and become stronger people.

Please hold us in your thoughts as we all adjust to this latest pivot in our family’s journey with Alzheimer’s – I’m holding you in mine as well!