How Alzheimer’s can change your perspective 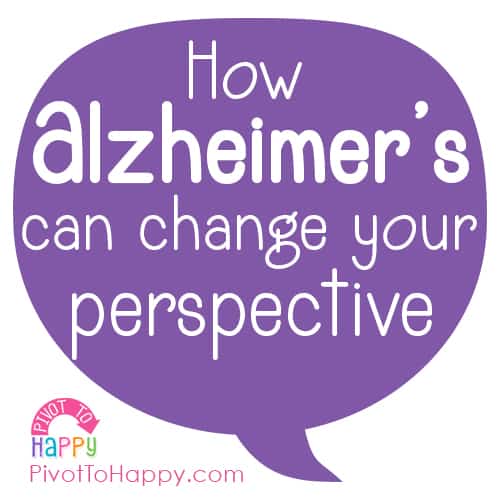 My dad has been in a memory care facility since May 2013. With 20/20 hindsight, forgetfulness, personality changes and finally official “dementia” was in motion for 10 years before that.

It’s a tricky business – because most people are aging as the signs appear, and not all forgetfulness is Alzheimer’s. You wonder, “Is he just getting old? Is he just turning into a grumpy old man? or is something else at work here?”

It started off with little things. Forgetfulness… what was that person’s name? Where did I put the keys? Looking to my mom to fill in the gaps of stories of their life.  Then it grew – my dad went from being a conversationalist to a deliverer of monologues about his life. He would tell us things that he had done, accomplished and seen as if we didn’t know – or like we didn’t care.  It was a rough few years, trying to patiently listen to the same stories over and over again… sometimes he could go on for hours!

Dementia is a broad term for a decline in mental ability that is severe enough to interfere with daily life. Memory loss is a common example. Alzheimer’s is the most common type of dementia that is caused by plaques and tangles in the brain; it can be detected with a spinal tap but final confirmation is usually done by an autopsy of the brain once the person is deceased.

My dad has a Ph.D. in Physics and taught Astronomy at West Chester University for over 30 years. He wrote a weekly newspaper article (that was required reading in my high school Physics class!) about naked eye astronomy. Each week he would tell you what to look for in the night sky. It has now been three years since he has known night from day.

I vividly remember standing outside of an adult day care, where he thought he was a volunteer, at 9:30 pm, in the Oregon rain, trying to explain why I thought it was night. (It was dark!)  At 8:50 he insisted it was time to go to work and told my mom he would walk if she wouldn’t take him. As he left the house she decided to drive him to show him the place was closed. When he got out of the car and wasn’t swayed by the locked doors and lack of lights, she called me in a panic.  My husband and I headed there to see what we could do.

I tried to use terms he might relate to, “Remember dad, the earth turns on its axis and when we are away from the sun it’s dark and that is night. When we sleep, not when you come here and work.”

“Who makes up these rules???” he asked, agitated and frustrated.

“Don’t you believe me?” I replied.

He thought about that and said, “I don’t think you would lie to me but it doesn’t make sense.”

We finally got him to agree to go home after my brother called the Alzheimer’s Association hotline and asked for help. They told him to have someone call, say they were a person he knew that worked at the facility, and explain that they had an emergency and had to close. So my sister-in-law’s boss called my phone, told my dad there was a water main break and would he mind going home? They would call him when it was time to come back.

My dad accepted this with no problem.  This was our first lesson in “Jumping into their reality”.  There comes a point where what is real to them is the only thing that matters so you jump in with them until they are complete.

It’s hard to believe that was less than three years ago. Now he is very withdrawn, speaks softly if he speaks at all and doesn’t usually make sense. I’m surprised and delighted if he comes up with a 3-4 word sentence that makes sense.

Because of my father’s Alzheimer’s, my perspective on life has changed.

While I know that we all have an expiration date, I never expected my dad’s final years to be like this, for this to be my family’s experience and challenge. I’ve learned, even more so than before, to be present in the day I’m given. I don’t take for granted another 30-40 years. Carpe Diem has a whole new meaning!

I will be sharing more of my journey and what I’ve learned, on this blog.

I have also written on a book to help others on this journey deal with all the things to come. CLICK HERE to learn more…

This has been a big part of why I started PIVOT TO HAPPY – because I’ve needed the skills to navigate this chapter in life and because I want to help others.

If you or someone you love are dealing with or suspecting that dementia is a definite possibility, know that you are not alone.  Know that you will have better days than others, as will the person affected. Be caring and as patient as you can, but also take care of yourself. You can’t be a good caregiver or support if you fall apart.

Holding you in my heart –